VDW #14-1019
​R​osa Oakridge is the granddaughter to Findus and the daughter to Dahlia/Rolf.  She was born in 2014 to our R litter.  She is a smart and lovable dog with a ton of character.  She predominantly hunts upland at this time but will be looking to incorporate some waterfowl/retrieving this year.

VDW #06-353
Findus vom Wolfsberg or "Finn" was imported from Germany in 2006 from Wolfsberg Kennels (est. 1994) in Kassel, Germany.  Findus performed and passed the JP test in 2010 while in Kansas although he was past the age of 18 months.

Findus was retired in 2011 from breeding but continues to be used in the field.  ​

VDW #09-333
Dahlia vom Auberg was imported from Auberg Kennels in Germany during the summer of 2009.  Dahlia's color is called "helltiger'’.  Dahlia has served us well through the years and was retired after her 4th litter in 2017. 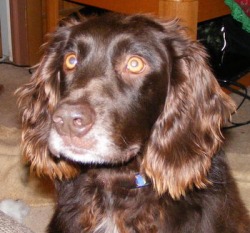 Bella was purchased from Dakota Kennels in 2003.  She was my first Wachtelhund and always seems to be my work in progress!  She has been multi-functional and been utilized from blood trailing to bird hunting.  She may not be my "primary" hunting dog, but she is always there for support!

Bella adores my children!  She sleeps with my son at night, verbalizes her displeasure when "left out" of any situation, and loves to go outside with my daughter to jump on the trampoline. Bella was spayed the fall of 2006 after 1 litter.